OT-82 has demonstrated efficacy against:

Although compounds that led to OT-82 were found via phenotypical cell based screening of chemical libraries, its mechanism of action was elucidated and confirmed through a combination of shRNA screening and affinity chromatography approach. OT-82 is an NAMPT  (NicotinAMide Phosphoribosyl Transferase) inhibitor.
NAMPT catalyzes conversion of nicotinamide to nicotinamide mononucleotide (NMN), a precursor of NAD. That determines its key role in bioenergetics of the cell and in the activity of NAD-dependent proteins, such as sirtuins, PARPS, etc. NAMPT exists in intracellular and extracellular forms. In the cell NAMPT is present in the cytoplasm and nucleus. Its phosphorylated form has 100-times higher activity. The role of other post-translational modifications is not defined yet.
Majority of tumor cells are very sensitive to NAMPT inhibition, due to a higher demand for NAD+ and ATP.  Out of all malignancies, leukemia cells are those the most dependent on activity of metabolic pathways utilizing NAD+  [Ying-Hua Wang, Cell 158, 2014, 1309-1323] 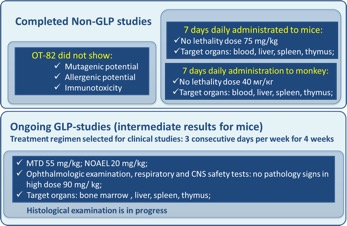 In 4 week GLP study in mice, NO DETECTABLE RETINAL TOXICITY was found.

NAMPRT has been recognized as an attractive cancer treatment target and several biotech companies attempted to develop NAMPRT inhibitors. Currently, three inhibitors of different chemical classes, APO866 (aka FK866), CHS-828 and GMX1777, have reached Phase I and II clinical trials. Development of all three have been, however, hampered by insufficient therapeutic index. OT-82 developed by OncoTartis has several advantages:
In addition, although NAMPT inhibition potency of OT-82 is similar to other known inhibitors in vitro, it demonstrated higher potency in an in vivo pre-B cells acute lymphoblastic leukemia (ALL) xenografts. This test was run at the Children’s Cancer Institute Australia for Medical Research (CCIA) according to the NCI-supported Preclinical Testing Program protocol established for evaluation of new agents against solid tumors and leukemia models. 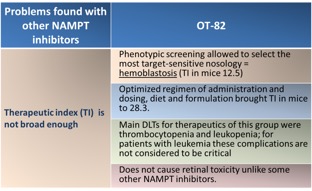